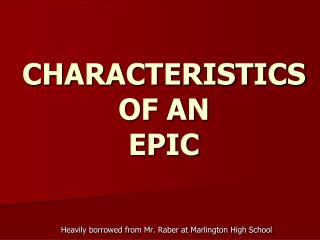 CHARACTERISTICS OF AN EPIC CHARACTERISTICS OF AN EPIC. Heavily borrowed from Mr. Raber at Marlington High School. Epic Definition. An epic is a long narrative poem that relates the great deeds of a larger-than-life hero who embodies the values of a particular society . -Sometimes called a heroic poem

CHARACTERISTICS OF AN EPIC

Characteristics of a RTS - . large and complex concurrent control of separate system components facilities to interact

Personality - . session 12. what is personality?. those inner psychological characteristics that both determine and

Characteristics of Lenses - . lens. is a transparent object with at least one curved side that causes light to refract.

Life-history Characteristics - . all organisms have been selected to maximize reproductive success over the course of

The Epic of Beowulf Translated by Burton Raffel - . the epic an epic is a long narrative poem about a larger than life