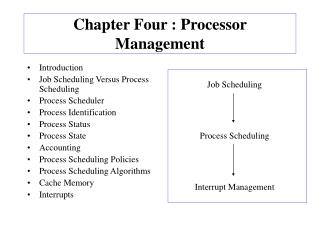 Chapter 4 The Central Processing Unit - . computers: tools for an information age. the cpu. the motherboard. the cpu. the

The Processor - Chapter 4. the processor. points to remember. chapter 1 explains the performance of computer is

Chapter 4 - . what do you need to know about hardware?. consists of electronic components and related gadgetry that