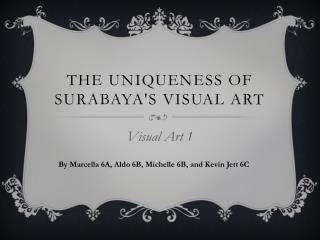 The uniqueness of Surabaya's visual art

The uniqueness of Surabaya's visual art. Visual Art 1. By Marcella 6A, Aldo 6B, Michelle 6B, and Kevin Jett 6C. introduction.

The uniqueness of Surabaya's visual art

Things that make me smiley - . by tiana miller. f acebook. me open to different ethic or hook up with my friends from

By: Jen Jett and Sam Sacek - . why is it important???. communicate information and processes to causes it reaction in

Culture and Language Teaching - . nicholas bradley nbradley@vega.aichi-u.ac.jp. 1. what is culture? 2. the ambiguity of

New Media Representations: Marcel Duchamp - . enduring understanding. students will understand that… the use of Introduction to the Skeleton - . the human skeleton is made of both cartilage and bone tissue. an infant’s skeleton

Visual Language - Being heard by being seen ron bergquist introduction is “who gets heard?” a function of who is