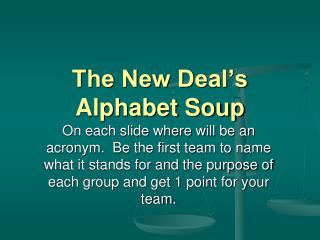 The New Deal’s Alphabet Soup. On each slide where will be an acronym. Be the first team to name what it stands for and the purpose of each group and get 1 point for your team. Hoover. From Soup to Nuts: If It’s About Behavior, APA Has IT - . presented by anne breitenbach, trainer, psycinfo. a little

INITIATING THE M&amp;A DEAL - . preparing for the deal, finding a buyer, conducting due diligence &amp; financing

ASL ALPHABET - . next . audience . 3-5 th graders students that would like to learn the sign language alphabet. next .