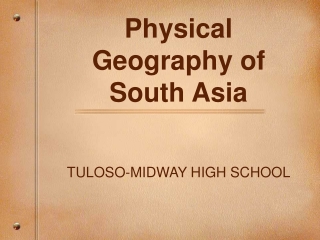 Chapters 23, 24 and 25: - . cultural geography of south asia. south asia: the land. is a subcontinent because its

South Asia: - . the cultural geography . scooby snacks. question 1 : what is the population of south asia and what

The Geography of India - . for thousands of years geography has made south asia a crossroads. trade routes brought

Empires of Asia - . geography, the mogul empire, and the fall of that empire . geography. because of the size of the

Physical Geography of South Asia - . land features. i. a separate land. *south asia is about ½ the size of the

Geography of South Asia - . objectives. explain life and our existence in the universe in two simple sentences. calculate