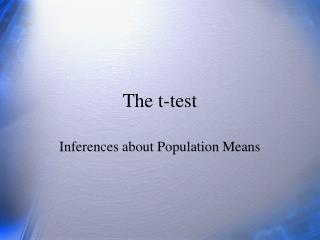 The t-test. Inferences about Population Means. Questions. What is the main use of the t -test? How is the distribution of t related to the unit normal? When would we use a t-test instead of a z-test? Why might we prefer one to the other?

Test ppt - . this is just for testing purpose.

Test Powerpoint - . this is just a test

This is a test ppt presentation

The t -test - . introduction to using statistics for hypothesis testing. overview of the t -test. the t -test is used to

Test PowerPoint - . checking to see if rsync will filter powerpoint files or let them through. here is a slide. it

Mammal Test: an Interactive PowerPoint Presentation - . by bernard john poole and lorrie jackson. what is a mammal?. a