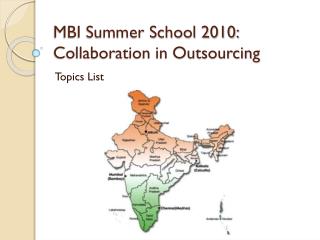 Outsourcing is out / Collaboration is in New approaches for the delegation of translation projects - . spin-off of nero

Offshore Outsourcing — Good or Evil? - . clothing, toys and shoes are manufactured overseas. so why not make software

Expectations of Summer Collaboration Days - . *6 days with own school teams *6 hrs./day - advised to meet one of these