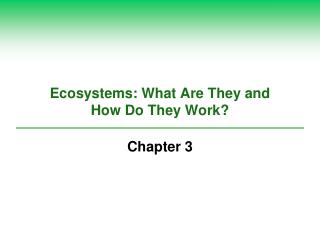 Ecosystems: What Are They and How Do They Work?. Chapter 3. All things come from earth and to earth they all return. Menander (342-290 B.C). How environmentally true is the previous statement? Explain. Main Questions of this chapter. What is ecology? Work-Related Attitudes - . work-related attitudes are evaluative tendencies toward aspects of work that are based on

For separate ecosystems to be classified as the same type of biome, they must — - Are you smarter than an 8 th grader?.

Jenga and the art of data-intensive ecosystems maintenance - . panos vassiliadis in collaboration with g. papastefanatos

WHAT IS A RAINFOREST? Rainforests are the Earth's oldest living ecosystems. - Rainforest. what is a rainforest?

Biomes Unit Test - . review. which of these best describes biomes? a. large ecosystems that have distinctive organisms