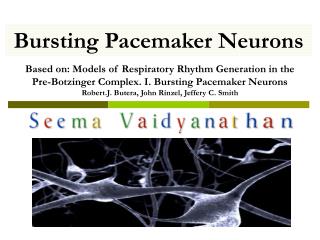 Neural Adaptation and Bursting or: A dynamical taxonomy of neurons - . april 27 th , 2011 lars kasper. introduction and

Document Bursting - Is a process for report bursting and for report delivery. this tool automates the distribution of

Document Bursting - A report distribution software used for emailing is called document bursting. for any general

CARDIAC PACEMAKER - . a cardiac pacemaker is an electric stimulator that produces electric pulses that are conducted to

Neurons - . do now. do now how does this relate to the nervous system?. homework due today. read section 31.1 answer

Neurons - . vary in size and structure, but have common features: cell body dendrites axon mature neurons do not divide,