Social Capital and Economic Governance: Japan, the US and Germany - PowerPoint PPT Presentation 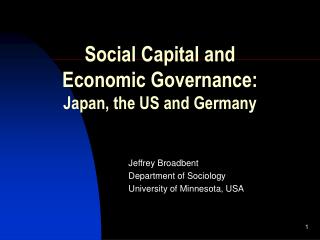 Social Capital and Economic Governance: Japan, the US and Germany

Social Capital and Economic Governance: Japan, the US and Germany

Politics of social policy in Korea - . why is inequality becoming a bigger concern? what effects did the democratization

8. The New Global Political Economy - . “the world is an unfair place” - stiglitz. is the global political economy

How Important Historically Were Financial Systems for Growth in the UK, US, Germany and Japan? - . franklin allen,

The role of the Hawaiian region in the US economy, politics and cultural life - . the state of hawaii. nickname: the