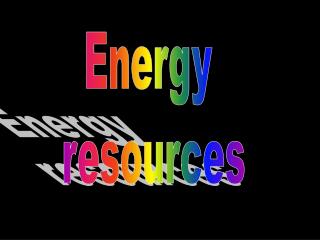 Energy resources. Natural Resources. A natural resource is a feature of Earth that benefits people. Earth’s natural material resources are things like air, fresh water, and soil. 16.2 Electricity from fossil fuels. A nonrenewable resource is not replaced as it is used. Energy and Enzymes - . energy in living systems. energy is the capacity to perform work energy can be converted from one