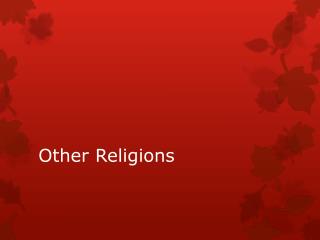 Other Religions. Jainism. Jain, a break-off from Hinduism, is an ethical system which believes that our souls are originally perfect, but karma corrupts the soul; yet the soul can be purified through right living.

Diverse Cultures of Africa - Ss7g4. the student will describe the diverse cultures of the people who live in