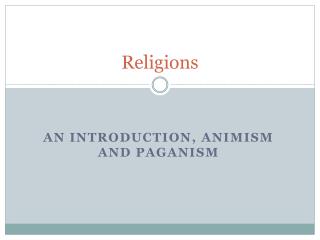 Religions. An introduction, animism and paganism. How to study belief systems. How do we define religion? How do we classify religions? What are their characteristics? How do they evolve? Cultural character? Shrines, stupas , cathedrals, Grottos, monasteries?

Religions of the World - . our study will cover the world’s religions. tonight will begin an overview. we will examine

Chapter 9: Christian Societies Emerge in Europe - . warm up. trade brought arabs into contact with: most important

Mongols - . “the mongols made no technological breakthroughs, founded no new religions, wrote few books or dramas”

RUSSIAN HISTORY - . “a riddle wrapped in a mystery inside an enigma.” – winston churchill. russian history. 1/6 th