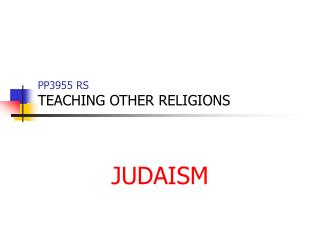 PP3955 RS TEACHING OTHER RELIGIONS. JUDAISM. The HISTORY. 4000 years ago tribes of people inhabited the Middle East – Jews. The first Jew (according to the Jewish Bible) was Abraham. Abraham heard a voice telling him to leave Mesopotamia and travel to a land he would be shown – Israel. Teaching other religions - . islam. the traditional greeting and farewell between muslims. assalamu aleykum peace be with

Other Religions - . jainism. jain, a break-off from hinduism, is an ethical system which believes that our souls are

Christian Attitudes Toward Other Religions - . when a christian sits down at a dialogue table with adherents of other

Christian attitudes towards other religions - 25 th april 2012. starter: do you agree with these statements? all

Other religions of the reformation - . england becomes protestant. henry viii wanted a son but his wife only had a

(11.3) Christian attitudes towards other religions - . all christians …. … believe in religious freedom. i.e., that

Importance of Knowing about other Religions - . to become a conscience, aware global citizen to become accepting of

WORKING WITH REFUGEES, OTHER RELIGIONS AND CULTURES - . immigration detention centers have been know to house over 100

What About Other Religions? 3 MAR 2013 - . quick re-cap. what religion is god? jesus did not come to start a religion. he

Students Teaching Each Other - . why it works!. learner-centered learning. an activity, in which students each teach

Religions - . what is the purpose?. judaism-origins who : abraham what : covenant with god when : 4000 years ago where :

Religions - . an introduction, animism and paganism. how to study belief systems. how do we define religion? how do we

Religions - . circumstantial. each child is born into a pre existing social structure dictated by parents and family.