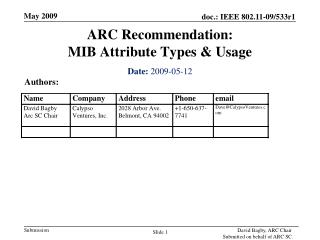 ARC Recommendation: MIB Attribute Types & Usage. Date: 2009-05-12. Authors:. MIB Exercise Motivation. MIB attributes are used for multiple purposes in the 2007 document, not all of which are consistent with the purpose of the MIB. MIB syntax is used to define “local” variables

Recommended Action - . adopt a resolution ordering the levy and collection of assessments within the downtown ventura

Usage of Some &amp; Any for M.2 - . by sasithorn gaysornmas. let’s do the pre-test!. pre-test. direction: choose

Working with Composite Data Types - . objectives. after completing this lesson, you should be able to do the following:

CHAPTER 4 - . the wavelike properties of particles. schroedinger’s cat: “am i a particle or wave?”. wave particle