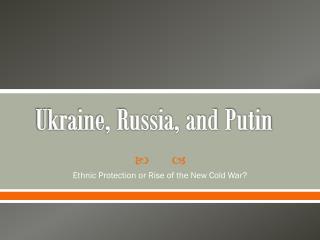 Ukraine, Russia, and Putin. Ethnic Protection or Rise of the New Cold War?. History of the Modern Conflict. 1945-1990- Soviet Union controls Eastern Europe either directly or through puppet governments The countries with puppet governments begin to protest and break-away in the late 1980s

The Crisis in Ukraine - . carter hoffman and seth gilgus. history. ukraine is not a member of nato or the eu nato and eu

Selecting Statements - . select the statement that best summarizes the photograph’s message. vladimir putin is the best

Graphing Russia and the Republics - . gathering data. find gdp per capita and infant mortality rate for each of these

Pray for Ukraine - . nearly 3 million people live in the capital city of ukraine, kiev. christianity in ukraine. a

Russia, Ukraine, the EU &amp; the new pipelines in the new post-2009 gas world: a way towards new equilibrium

Gift From the People of Russia to USA &quot;MONUMENT TO THE STRUGGLE AGAINST WORLD TERRORISM&quot; - Um presente