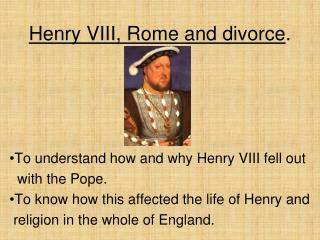 Henry VIII, Rome and divorce . To understand how and why Henry VIII fell out with the Pope. To know how this affected the life of Henry and religion in the whole of England. Key people in the reign of Henry VIII . Six wives. Three children. Three advisors. Three enemies.

Was Henry VII a gangster? -  starter: these pictures all show things to do with ‘gangsters’ (some real, some not).

Why Did Henry VIII take break from Rome - . by matt quinn. introduction. we all know that henry vii was famous for his

Henry VIII - . all about the king. contents. who was henry? henry’s children catherine of aragon anne boleyn jane

Henry VIII - . by levko e . n. and his wives. first she married arthur, henry's older brother. she was 17 and henry was

Henry VIII’s Break from Rome - Henry broke from many things, for example, five of his six wives. however we’re not

The 6 sorry wives of Henry VIII - . these are the 6 wives of henry the 8 th. catherine of

Henry VIII - . aim/goals: why did henry viii form the church of england? do now: when it comes time for you to become

The Reformation: Henry VIII and Catholic Reforms - . eq: how did king henry viii influence the reformation and how did

The Wives of Henry VIII - . henry viii. catherine of aragon. sister-in-law of henry. married him when she was 23, he was

Henry VIII - . by georgia h. who was henry viii?. henry viii was born 28 june 1491 at greenwich palace his father was

Rome - . rome. like the persian empire, rome took shape on the margins of the “civilized”