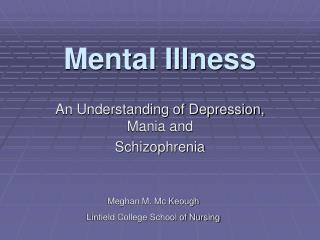 Mental Illness. An Understanding of Depression, Mania and Schizophrenia. Meghan M. Mc Keough Linfield College School of Nursing. What is a mental illness?.

Culture and Mental Illness - . what is mental illness?. actually, the preferred term is psychological disorder. the

WHAT IS MENTAL ILLNESS? - . sopranos. behaviors viewed as diseases change over time from rowdy to sick conflict with much

HISTORY OF MENTAL ILLNESS - . nearly two-thirds of all people with diagnosable mental disorders do not seek treatment. --

Mental Illness - . as a social problem. statistics. 1 out of every 4 americans suffers some for of mental disorder in a

Normality, Mental Health and Mental Illness - . its all in your head - literally. something to be aware of first!!.

Mental Health - . what is mental health?. mental health means striking a balance in all aspects of your life: social,

MENTAL HEALTH AWARENESS - . mental illness in georgia. in the state of georgia nearly 500,000 of its close to 8.2 million

Mental health Vs Mental illness - . normality and abnormality. socio-cultural behaviour that is accepted in a particular