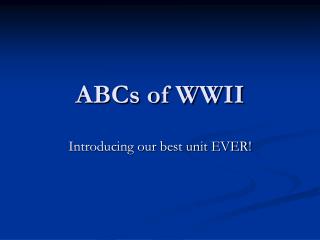 ABCs of WWII. Introducing our best unit EVER!. Allies. U.S., England, France, & Russia. These were the Allied Powers in World War II who fought the Axis Powers from 1939 – 1945. Blitzkrieg.

The Cold War! - . social studies 10 ms. rebecca. the end of wwii……. how do you think people felt after wwii? which

The ABCs of CSI - . continuous school improvement. if nothing ever changed, there’d be no butterflies. unknown.

Fighting WWII - The eto and pto. soldiers from the 2nd ''dagger'' brigade of the us 1st infantry division on a road march

Unit V - WWII - . review guide. 1. what are the causes of wwii? flamed – explain each cause and how it contributed to

WWII - . what caused wwii in europe?. revenge: germany wanted revenge for everything lost in the treaty of versailles at

Texas After WWII - . because food, clothing, weapons &amp; other supplies were needed for the war, businesses made

Aftermath of WWII: The Iron Curtain - . essential question. how did wwii change europe?. u.s.s.r. after the death of

WWII - . what another war?. when was wwii?. world war ii started in september of 1939. america did not enter the war