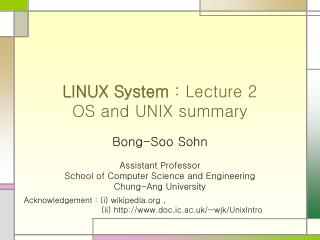 Introduction to Linux on Iceberg - . what are unix and linux? the shell getting connected basic unix/linux commands

Linux Basics - . roadmap. what is unix? what is linux? which linux distribution is better? fish vs. fishing basic

CE01000-3 Operating Systems - . lecture 19 linux/unix – file system. overview of lecture. in this lecture we will look

1.2 Operating System Structure - . 1. monolithic system. the earliest and most common os architecture. every component of

Chapter 1: Kernel Overview - . objectives. review development and history of unix and linux. clarify the nature and