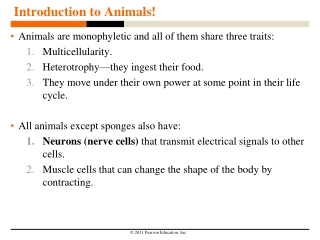 Introduction to Animals!. Animals are monophyletic and all of them share three traits: Multicellularity. Heterotrophy—they ingest their food. They move under their own power at some point in their life cycle. All animals except sponges also have: Endangered Animals - . by: sharone blue. can you help us?. table of contents. georgia performance standards definitions

Coastal Animals - . listen to and read the pages about coastal animals. when you have finished reading, click on the blue

Animals - . what makes an animal? how can you tell if something is an animal or not? what are some examples of animals?.

Introduction to Zoology - . unit 1- mrs. stahl. zoology- what is it? . the study of animals of course!  extremely

Zoology - . an introduction. zoology. study of animals in this class- important kingdoms- protista- some animal-like

Animals Held Captive - . by. mike dunbar. graph. thesis. in my opinion animals shouldn’t be held captive because it

Introduction to Animals - . chapter 32. characteristics of all animals. eukaryotic, multicellular, heterotrophic can be