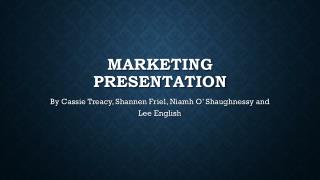 Marketing presentation. By Cassie Treacy, Shannen Friel , Niamh O’ Shaughnessy and Lee English. Demographics . Cassie Treacy. What is demographics?. Demographics can be defined as a statistical view of a population, generally including age, gender, income, schooling, occupation and so on.

Marketing For A New Career - We recommend that you undertake a comprehensive self appraisal of your career to date,

Majoring in Marketing Careers in Marketing - . 0. why major in marketing?. at the core of every type of organization

INTRODUCTION TO BUSINESS TO BUSINESS MARKETING - . chapter 1. use with business to business marketing management: a

Marketing - . learning objectives. what is marketing? why do businesses conduct market research and what methods do they

Presentation On MARKETING - . marketing means. marketing is the process of planning and executing the conception,

Nature and Scope of Marketing Presentation 1 - . by jyoti sikka, s.s.c.b.s. . the importance of marketing in our global