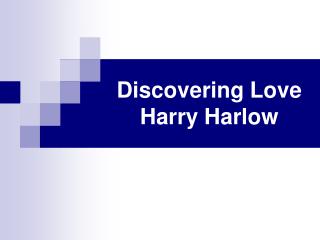 Discovering Love Harry Harlow. Background on Love Theories. Freudian Theory Focused on the bond between you and your mother beginning at the first moment of birth is first experience of love. Focused on oral tendencies Behaviorist Theory All human behavior is associated with primary needs. Harry Harlow - . by shafiqa and hiruni. harlow’s experiments . he developed his theory on human infants in the 1950’s

Harry Harlow - . a theorist exploring the early years. harry harlow: the man behind the experiment. harry harlow is a

Discovering Love - . by: chloe hromockyj and dylan brown. background. harry harlow – experiences as a child and

Dr. Harry Harlow and His Studies - . the famous experiments that psychologist harry harlow conducted in the 1950s on