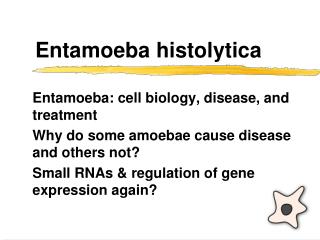 Entamoeba histolytica. Entamoeba: cell biology, disease, and treatment Why do some amoebae cause disease and others not? Small RNAs & regulation of gene expression again?. Boris simplified summary of it all. Note that this is only a schematic tree

Protozoa - . unicellular organisms. pathogenic protozoa : protozoa that exist in human body and cause harm to infected

Case No. 26 - . lim, yoontaek clark. case. ef, a fresh college graduate, is applying for a job at a pharmaceutical

Protozoa - . protozoa, the tree of life and the origin of eukaryotes what makes an ameba an ameba? entamoeba histolytica

Amebiasis Amebiasis is infection with Entamoeba histolytica . This organism can cause: - Asymptomatic intestinal

Entamoeba moshkovskii is associated with diarrhea in infants and - The 3 rd international conference, sept 1, 2012 at

Amoebic Dysentery - . jacob blair and matthew raemore. what is it?. protozoan caused by amoeba entamoeba histolytica

Entamoeba histolytica Pathogenesis and pathology - . factors that may influence the pathogenesis: 1- strain variation.