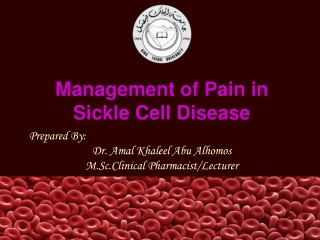 Management of Pain in Sickle Cell Disease. Prepared By: Dr. Amal Khaleel Abu Alhomos M.Sc.Clinical Pharmacist/Lecturer. Introduction. Sickle-cell disease (SCD) is the commonest globin gene disorder: across the world, about 300 000 children are born with it each year. Video:. SICKLE CELL ANAEMIA - . . . . sickle cell disease is a group of hemoglobin disorders in which the sickle ?-globin gene is

For example: Sickle Cell Anemia and Evolution - . your name. brief introduction of the disease. what is it? where is it?

A treatment for sickle cell disease in a mouse model - . group a5 laura plank, truc nguyen, joshua trinidad, and peyton

Sickle-Cell Disease Anemia - . this is a severe hemophilic anemia resulting from homogenous inheritance of a gene which

Sickle Cell - . introduction. sickle cell anemia is an inherited disorder that leads to the production of an abnormal