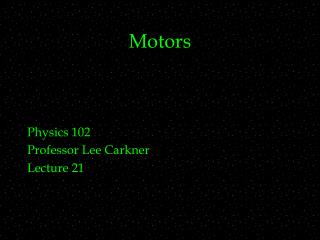 Motors. Physics 102 Professor Lee Carkner Lecture 21. Ring in Solenoid. If the current flows clockwise through the solenoid, the B field inside is straight down We need to find the flux through the loop before and after the current is switched off F = BA cos q = BA Motors - An application: a car

Motors - . physics 102 professor lee carkner lecture 21. ring in solenoid. to get maximum flux, the ring should face up

Motors - . a current in a wire is subject to a magnetic force. magnetic field out of loop perpendicular to plane a loop

DC Motors - . taken from a variety of sources including: http://electronics.howstuffworks.com and