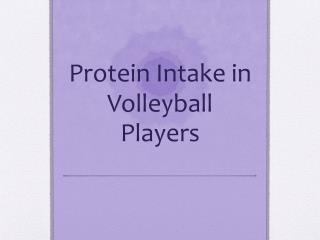 Protein Intake in Volleyball Players. Introduction. Recommendations for endurance athletes is 1.2-1.4g/kg Growing female athletes need to be sure it is met Is overall caloric intake representative of protein intake?

How To Be A Girly Girl In Just 10 Days Quiz - . stephanie. what play is lindsay in?. cinderella sleeping beauty the

By Lauren Boyd, Desiree Udarbe &amp; Sarah Peterson - The effect of a vegan/vegetarian diet on diabetes and insulin

Eating and Exercising for Weight-loss - . presented by rockwell. overview. why is weight-loss important? eating right

The Foundations of Nutrition The Dietary Guidelines for Americans, 2005 - . welcome! presented by:. partner: california

MY HOBBY- VOLLEYBALL - . by jakub wudarczyk. volleyball. my hobby is volleyball. i have been playing volleyball for 8