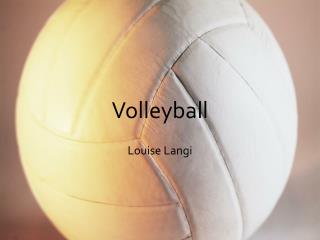 Volleyball. Louise Langi. Preparing to play…. When playing volleyball, plan to have good running shoes, clothing that you can run jump slide on the floor and last, remember to never take your eyes off the ball whether its on the opposite side or you already hit the ball. Main Rules. Volleyball - . history. the game of volleyball, originally called &quot;mintonette&quot;, was invented in 1895 by

Volleyball - . what is volleyball?. played by two teams of 6 players played with ball and net. what is the goal of

Volleyball - . no big deal, just the best sport in the world. created at the ymca in 1895 by william morgan. it was

VOLLEYBALL … - . … is more than passion. volleyball is a team sport in which two teams of six players are separated

Volleyball - . volleyball was first conceived by william j. morgan of the holyoke, massachusetts, ymca in 1895.

Volleyball - . safety!. never wear any jewelry while playing no gum make sure that the poles are well anchored into

Volleyball - . invented by businessmen at lunch break court size—30x60 team has 6 players after whistle you have 5

VOLLEYBALL - . you can significantly improve your health and quality of life by including moderate amounts of physical

Volleyball - . my favorite sport is volleyball. i love to play volleyball and i want to be a volleyball player. every