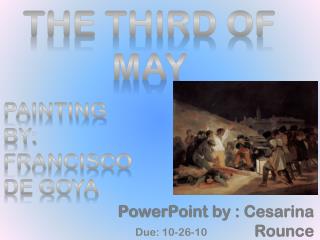 The Third of May. Painting By: Francisco de Goya. PowerPoint by : Cesarina Rounce. Due: 10-26-10. Biography of Francisco de Goya. Goya was born on March 30, 1746. He was apprenticed to a local painter at 14, then went on to study in Italy to complete his training.