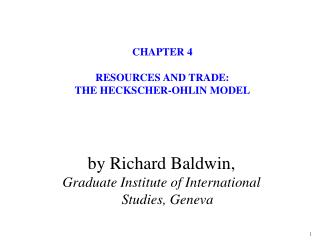 CHAPTER 4 RESOURCES AND TRADE: THE HECKSCHER-OHLIN MODEL. by Richard Baldwin, Graduate Institute of International Studies, Geneva. Lessons of SFM. We saw all the lessons of Ricardian model PLUS 1. Pains & gains from trade 2. factor endowment differences were ultimate source of trade

Heckscher-Ohlin - . to demonstrate the heckscher-ohlin (ho) result we will use some of the earlier results, in particular

Heckscher-Ohlin - . to demonstrate the heckscher-ohlin (ho) result we will use some of the earlier results, in particular

Chapter4 Resources and Trade:The Heckscher-Ohlin Model - . introduction a model of a two-factor economy effects of

The Heckscher-Ohlin Theory - . chapter 4. problems with classical model. it has some of the strict assumptions the

Factor Endowments &amp; the Heckscher-Ohlin Theory Chapter 5 - . 1 introduction. we will study assumptions of the h-o

Chapter 2 International Trade Frameworks and Policy - . the historical dimension. the rise and fall of the roman empire

Chapter 4 Resources and Trade: The Heckscher-Ohlin Model - . kernel of the chapter. a model of a two-factor economy

Chapter 5 International Trade Theory - An overview of trade theory. free trade refers to a situation where a government

Exchange Rates And Comparative Advantage - . exchange rates. when trade is free—unimpeded by government-instituted