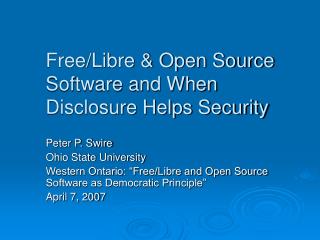 The Edubuntu Linux - . open source. a program in which the source code is available to the general public for use and/or

.NET Security - . by r.s. security . what is security ? security in general means freedom from risk and danger. so what

Software and Security - . why software?. why is software as important to security as crypto, access control and

Open Source Software (OSS) - . group 7 i gusti made aditya henry he daniel vogler trisha moon. do you recognize either of