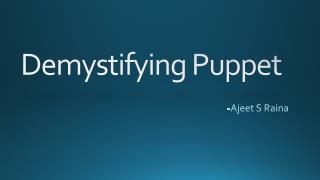 -Ajeet S Raina. Demystifying Puppet. What is Puppet?. Infrastructure-as-a-Code Puppet is an open source configuration management utility It is written in Ruby and released as free software under the GPL Built to be cross-platform A Declarative Language A Model Driven Architecture. PUPPET PRESENTATION - . some qualities of adult learners by linda k. superville. what is a puppet? a puppet is =. some

Puppet Animation - . part 1. as we have seen, animation has been used in early days of film in some cases clay has been

Puppet Training - Puppet is software, and it is an open-source configuration management tool. the linux, unix-like and

Puppet Show Groups - . directions. select an event in history that we have studied. create a puppet show that plays out

Santa’s Elf Puppet - . print out and colour in the template. cut out all the pieces. it should look like this. poke

Demystifying Electrophoresis - . electrophoresis. used in biotechnology as a separation method molecules move by