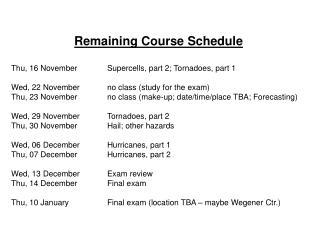 “ SUPERCELLS ” - So far we have seen only 3-d crystalline systems. nature is more complex than this. non-periodic

Lecture 13 (11/25) - . severe storms. severe storm. a thunderstorm must have one or more of the following to be

Simplified Form of the Frontogenesis Equation - To start today: let’s revisit frontogenesis, both the equation and the

Dapper Ghosts: For Halloween and No Shave November - . perfect for halloween as well as no shave november! daniel auber

Tornadoes - . by: katie mchugh, valerie rozzo , and kim smethurst. what is a tornado?. a tornado is a dark funnel-shaped

tornadoes - . will you be swirled away, or prepared?. kelsey bowman, november 2013. things to know. atmosphere

Time Outs and Conferences—Part 1 - . our mission. review the rules for time outs and conferences over the next 2 weeks

UNIT 6 , Part 1 The Extraordinary and Fantastic - . click the mouse button or press the space bar to continue. unit 6,

The Pathology of Liver &amp; Biliary System Part-1 - . is life worth living? it depends on the liver!. this is liver