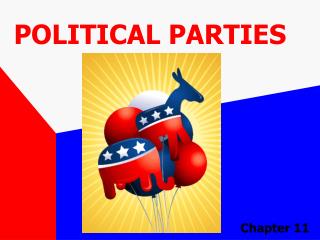 POLITICAL PARTIES. Chapter 11. Goal of Political Parties:. TO GET CANDIDATES ELECTED! To mobilize voters and their funds in an effort to win office Founding Fathers felt they were unnecessary and feared factions (Federalist No. 10!) BUT … could our democracy exist without them? Political Machines - . what is a political machine?. an organized group that controlled the activities of a political