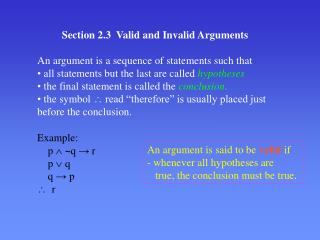 Section 2.3 Valid and Invalid Arguments. An argument is a sequence of statements such that all statements but the last are called hypotheses the final statement is called the conclusion . the symbol  read “therefore” is usually placed just before the conclusion. Example:

2-4 Rules of Logic - . what is deductive reasoning? what is the law of detachment? what is law of syllogism?. you used

Part 2 Module 3 Arguments and deductive reasoning - . logic is a formal study of the process of reasoning , or using

DISJUNCTIVE AND HYPOTHETICAL SYLLOGISMS - . disjunctive propositions: e.g either whales are mammals or they are very

Valid arguments - . a valid argument has the following property: it is impossible for the conclusion to be false, if we

Discrete Structures - . chapter 2: the logic of compound statements 2.1 logical forms and equivalence. logic is a science

Valid AND Invalid Arguments 2.3 - . instructor: hayk melikya melikyan@nccu.edu. argument. an argument is a sequence of