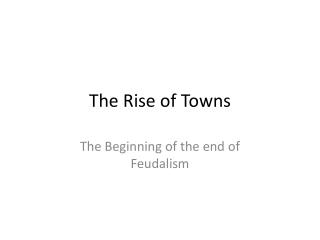 The Rise of Towns

The Rise of Towns. The Beginning of the end of Feudalism.

The Rise of Towns

The Rise of Nations The Late Middle Ages - Chapter 14 formation of western europe this powerpoint is in teacher-public,

Towns &amp; Life - . how did towns run and what did they accomplish?. what did towns look like?. towns served a

The Rise of Europe - . end of feudalism, the growth of trade and the commercial revolution. impact of the crusades.

CHAPTER 26 RISE OF TRADE AND TOWNS - . section 1: trading centers-explains the growth of trade and rise of towns section

THE RISE OF MEDIEVAL EUROPE - . backward period of time for europe. life for people existed mostly in their villages,

The Rise of Europe - . chapter 10 eqs: what factors influenced the development of early europe? how did feudalism affect