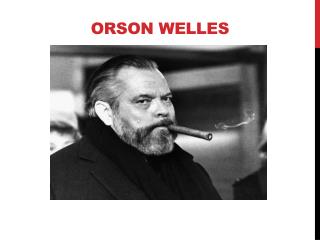 Orson Welles . Biography . Born George Orson Welles on May 6, 1915 in Kenosha, Wisconsin He was the second of his parents two children; the oldest was Richard Ives Welles Jr. He was raised as a Roman Catholic but didn’t consider himself as religious

Caught ’ ya! for March 4, 2013 - . its vivian virtuous whispered isabelle to her freinds. i remember her from last year

Vanderbilt-Pakistan Lesson 9 - . april 2013. “food is our common ground, a universal experience. ”. “ask not what

The leadership process reflected on animals By Lidy Welles I6030513

Ender s Game - Ender's game fan trailer. orson scott card. card says that as a child, he thought as an adult thinks with

Film Editing - . welles: “ for my vision of the cinema, editing is not one aspect. it is the only aspect. ”. 3 key

What is History? - . from the greek ‘historia’ – information or an inquiry designed to elicit truth. the term