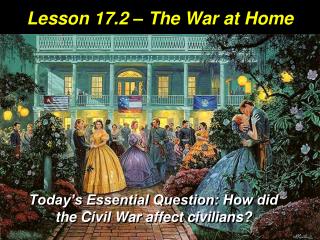 Lesson 17.2 – The War at Home. Today’s Essential Question: How did the Civil War affect civilians?. Vocabulary . Copperhead – Northerner who wanted peace with the Confederacy instead of victory in the war civilian – anyone who is not in the military Lesson Planning - . main things that a teacher needs to know. the aim of the lesson what new content in the lesson