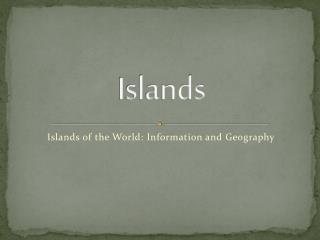 Islands. Islands of the World: Information and Geography. What is an island?. any area of land smaller than a continent and entirely surrounded by water. Islands may occur in oceans, seas, lakes, or rivers. A group of islands is called an archipelago . Islands - . islands can serve almost as a laboratory for the study of biogeography. the biota of an island is simpler

Islands - . essential questions: what is an island? how are islands different from continental masses? what are some

Islands - Islands can serve almost as a laboratory for the study of biogeography. the biota of an island is simpler than

Islands - . what is an island?. an island is a piece of land surrounded by water. it may be in a river, a lake or the

Virgin Islands - We warmly welcome you to our website for the best accommodation packages in virgin islands. check it out

Solomon Islands - . aidan daly. government. the solomon islands have a parliamentary democracy and a commonwealth

Galapagos Islands - . by: nicole villegas. location . the galapagos islands are located 6000 miles off the coast of

12 ISLANDS - . they are really fantastic.you can attend a bout tour and see the islands . night in fethİye. the tombs of