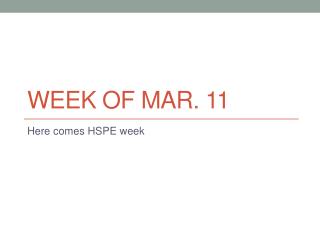 Week of Mar. 11. Here comes HSPE week. Not this. This!. Efficacy. To determine the efficacy of studying before a test, I compared scores from tests that I studied for to the tests for which I did not study. Please guess the definition . . .

Thursday, March 3 – “Do Now” - Answer the following questions: define the word parody. what effect does parody have