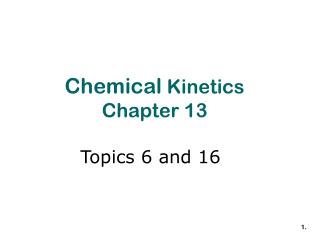 Chemical Kinetics Chapter 13. Topics 6 and 16. 1. What do we mean by kinetics?. Kinetics refers to the rate at which chemical reactions occur. The reaction mechanism or pathway through which a reaction proceeds. 2. Topics for study in kinetics. 3.