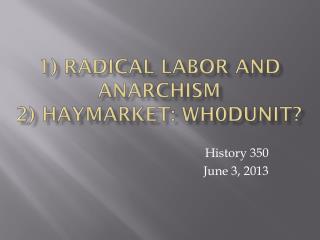 Labor of Love - . “for god is not unjust to forget your work and labor of love which you have shown toward his name, in

Anarchism - . would (and could) we do better without government? jan narveson [professor emeritus, u of w]. anarchism --

ANARCHISM - . robert paul wolff. overview. what is anarchism? the distinction between power and authority wolff’s

Plato Vision - . who are we?. we are a contract school with cps through american quality schools. we have to use cps

The Haymarket riot - Events that made chicago famous. the haymarket riot. bell ringer. background. in 1886, chicago had

Anarchism - . common usage and definition anarchism, liberalism and socialism human nature and the need for government

CHAPTER 7 - . political philosophy. section a. anarchism. 1. governments contrary to the way of nature: chuang-tzu 2. an