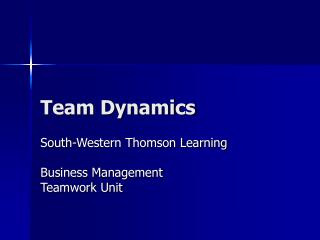 Team Dynamics. South-Western Thomson Learning Business Management Teamwork Unit. What are teams?. “Talent wins games, but teamwork wins championships.” - Michael Jordan. Why do we have teams?. Two heads are better than one. Gain in knowledge from each other

Ch 9. Rotational Dynamics - . the action of forces and torques on rigid objects. (b) combined translation and rotation.

Kinship Dynamics - . what is kinship?. sense of being related to another person(s) set by rules (sometimes laws) often