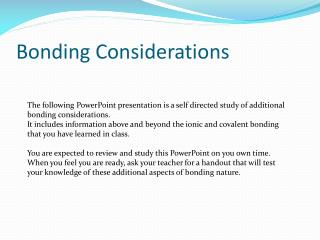 Bonding Considerations. The following PowerPoint presentation is a self directed study of additional bonding considerations. It includes information above and beyond the ionic and covalent bonding that you have learned in class. Bonding… - . intra molecular forces. bonds that occur between atoms example: h-o-h, the bonds that hold the h to the o