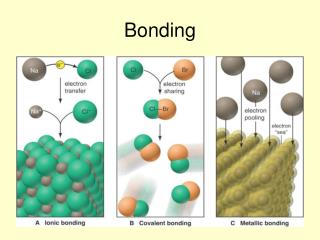 Bonding. An attraction between anions and cations. Stronger than covalent bonds. Commonly called salts. Ionic Bonds. Coulomb’s Law. The strength of an ionic bond can be determined by 2 factors: The charge of the ions, the higher the numerical charge value the stronger the attraction.

Chemistry Ch. 8, Covalent Bonding - . covalent compounds: are joined together by sharing electrons with each other.

Core build up and Amalgam bonding - . 12 th october. learning outcomes. to know the definition of a core build up. to