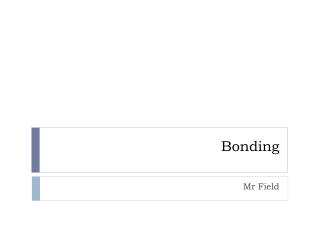 Bonding. Mr Field. Using this slide show. The slide show is here to provide structure to the lessons, but not to limit them….go off-piste when you need to! Slide shows should be shared with students (preferable electronic to save paper) and they should add their own notes as they go along.

Bonding - . why bonding?. some atoms are very reluctant to combine with other atoms and exist in the air around us as

Bonding - . ionic and covalent. key terms 1. chemical formula– the combination of chemical symbols and subscripts to

1.6 Bonding - Ionic bonding a. recall and interpret evidence for the existence of ions, limited to physical properties of