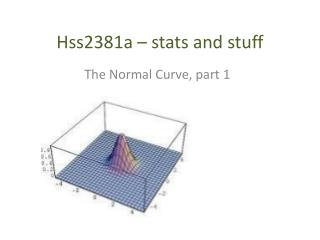 Hss2381a – stats and stuff. The Normal Curve, part 1. No class on Thursday!. Interdisciplinary Journal of Health Sciences. WANTED : Seeking applicants for the 2011-2012 editorial team Students in both the English and French HSS streams are encouraged to apply. fusion of stuff - . crated by carter voices, sound effects by carter and sandy hasn’t done better than this. note: all

BME STATS WORKSHOP - . introduction to statistics. part 1 of workshop. the way to think about inferential statistics.

The Technical Services Stuff in IT Services - . a brief tour of the technical and service offering plethora – who

Chapter 17 Star Stuff - . 17.1 lives in the balance. our goals for learning: how does a star’s mass affect nuclear