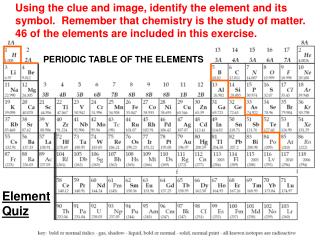 Using the clue and image, identify the element and its symbol. Remember that chemistry is the study of matter. 46 of the elements are included in this exercise. PERIODIC TABLE OF THE ELEMENTS. Element Quiz. The lowest density gas. By far the most common element in the sun and universe.

POP quiz! - . review your reading (up to page 360) for a pop quiz, this quiz will count as a quiz grade. your desk must

Marketing - . quiz #9. 1. this element of the promotional mix is often seen as more credible a. advertising b. sales

A short quiz - . this short quiz has been written to model the use of action buttons in powerpoint. when you are brave

Element Baby Book Project - . procedure and example. introduction. in this project you will adopt an element from the

Uranium Quiz! - . before you learn more about uranium, how much do you already know?. what is uranium’s atomic number?.

CHAPTER 4: CHEMICAL COMPOSITION OF THE CELL - Element in the cellthere are about 92 element occurring naturally in

A short quiz - . this short quiz has been written to model the use of action buttons in powerpoint. when you are brave

What is Argon? - . by matthew prell. what are elements?. definition: a element is a substance in which all the atoms in