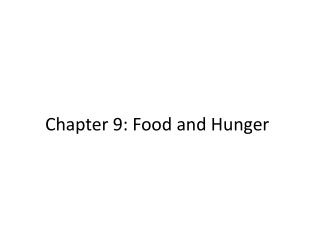 Chapter 9: Food and Hunger. 9.1 World Food And Nutrition. Millions of people are chronically hungry Famines usually have political and social causes Almost Never Due to Physical Lack of Food Overeating is a growing world problem We need the right kinds of food

Chapter 9: Motivation and Emotion - . what drives your behavior? what is motivation? motivational video. understanding

Biological Needs: Hunger - . warm-up. what is your opinion on this issue? should healthy school lunches be a nation-wide

Chapter 9 DRUGS - . introduction. a drug can be defined as a natural or synthetic substance that is used to produce

Hunger Motivation Chapter 11, Lecture 2 - . “grocery shop with an empty stomach and you are more likely to think that

The Economics of Food and Hunger in Haiti - . with food prices rising, haiti's poorest can't afford even a daily plate of

Chapter 10 Agricultural Issues - . question responses. #1) explain the differences and similarities between the following

Chapter 9 Motivation and Emotion - . motivation. dynamics of behavior that initiate, sustain, and direct or terminate