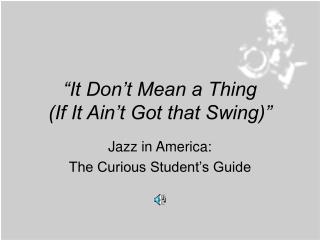 “It Don’t Mean a Thing (If It Ain’t Got that Swing)”. Jazz in America: The Curious Student’s Guide. What Is Jazz?. “If you have to ask, you’ll never know.” ~ An Early Jazzman. Jazz swings! Jazz improvises!. Jazz Is…. One of America’s greatest contributions to the arts. Java Swing - . the origins of the swing the awt components use native code resources and referred to as heavyweight. the

Is A Little Learning Such A Dangerous Thing? - . sharing a vision conference springfield, il 1 october 2003. the

scssconsulting - Www.scssconsulting.org. grandma masse’s rules for success: “the smart guys are the guys who learn

Welcome to Humanities B - . 1950-present. i can explain policies &amp; procedures for arts humanities b. find your

One Thing Remains - . higher than the mountains that i face stronger than the power of the grave constant through the

Do Now - . take a notecard from the front table. on one side, write one thing you know about the american revolution and